Blog | The Pitfalls of Plagiarism

A guide to being a pioneer and not a parrot.

Plagiarism is the “wrongful appropriation” and “stealing and publication” of another author’s “language, thoughts, ideas, or expressions” and the representation of them as one’s own 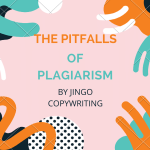 Many moons ago, before Tom was a creative copywriter, he was involved in a lot of local writing circles. He regularly attended poetry readings, and was known for his poems and his unique delivery style. He knew how to enunciate stanzas just as well as he knew how to write them. He studied English as his major at Uni, and excelled in anything he did that was writing related.

We’d been doing a creative writing course (elective) together, and one of our assessments was to read a story we’d written ourselves to the entire class (of about 30 people!). A young woman of approximately 20, who we will call Jenny (for the sake of this anecdote), was told it was her turn to read. She stood up, and started reading Tom’s Caravaggio story (passing it off as her own!). Jenny was evidently the ‘friend of a friend.’ Tom started mouthing the words she was reading to the lecturer (let’s call her Abbey), whispering to her “this is my work!” I too was murmuring that the story wasn’t hers. It was awkward as the tutor knew it was Tom’s piece as she’d read it in a different class at a different time. Abbey had to stop Jenny after the first page or two and ask her to step outside. To her credit she didn’t humiliate Jenny, but just said to the rest of the class there was an issue with the piece she was reading.

When the three of us stepped outside (I was allowed to come to verify that it was in fact Tom’s piece) Jenny started to cry. She said,

“I’m so so sorry. I knew I didn’t have much time left until assessment, and a friend gave me this, and I loved it. It didn’t have the author’s name on it, and so I thought I could pass it off as my own and get a good grade in the unit. I would’ve never guessed that it was Tom’s story.”

Abbey didn’t take it any further, but instead said she would give her an additional two weeks to write her own piece.

This is just one example of plagiarism and why it’s such an arse hat thing to do.

Just recently I saw a ‘Facebook friend’ try and pass off a famous blogger’s piece as her own. The fact that she didn’t put it in quote marks, and signed it off with a heart and her own name suggests that she wanted people to think she’d written it. I’m astonished that she didn’t think anyone else would notice, as the said blogger has at least half a million followers after all. It’s mind boggling! I commented with a question mark asking if it was the blogger’s piece, and she willingly admitted it was – but the point is, she signed the piece off as her own.

When you do anything well – people will try and plagiarise, parrot, pirate, copy and imitate.

The problem is, you don’t get away with it – especially not these days with social media and how it impacts on us being a global community.  You may not even be found out as such, but people will sense the inauthenticity of your ‘product’.

With the rise of social media, we can peek into the lives of people we barely know. Everyone has a handful of ‘friends’ that they’ve met once or twice and then have connected on FB – privy to their thoughts, ideas, family photos, political beliefs, etc.

In our work as By Jingo Copywriting, we’ve had businesses and individuals use some of our exact wording, and it’s not a nice feeling, but without all the ‘brand personality’ and experience to back it up, it just looks out of place, and frankly – like it’s been lifted.

Let us be clear though. There is a difference between being inspired by someone, and plagiarising them! Being inspired means you model yourself on what they do well, but still make it your own. You stamp it with originality. If someone’s writing, design, fashion, style, etc., enlivens you, wonderful, use it as a guide, but still bring your own little bit of shizzle to it.

What are some experiences you’ve had with your ideas being adopted as someone else’s?